The University of Cadiz (Facultad de Filosofía y Letras, Nautical and Undearwater Archaeology Program – CEIMAR) in colaboration and support of Network of GAMA, presents the 21st Symposium of Mediterranean Archaeology.

Papers Inscription: Before 1st of September 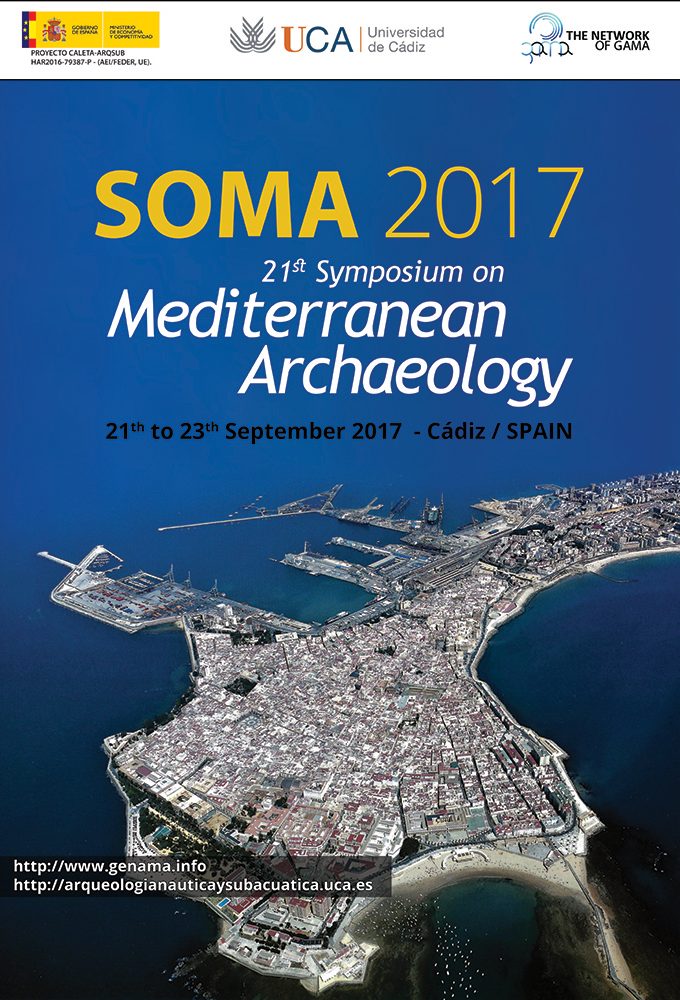 The 21st annual meeting of the Symposium on Mediterranean Archaeology (SOMA) will be held in Cadiz, Spain on 21-23 september 2017. As it has been in the past, this symposium will continue to provide an important opportunity for scholars and researchers to come together and discuss their works in a friendly and supportive atmosphere. Our spectrum is growing wider due to the increased importance and knowledge of interdisciplinary works in today’s scientific era.

Since prehistoric times the Mediterranean has been acting as a locale for interaction between groups inhabiting regions that are now studied mainly within the different sub-fields of ancient studies and archaeology. In the recent years, however, the development of research techniques and analytical models of archaeological evidence have identified similar historical paths that are similar if not, in some cases, common to these different areas of the ancient world from the West (Iberian peninsula) to the East (Anatolia and Levant) from the North (Europe, Black Sea Coast) to the South (Maghreb and Egypt). However, throug this Symposium we would like to emphazise the maritime aspect related with this conection. The Mediterranean Sea and his shorelines rather than a frontier favoured connectivity among the social groups that populated it.

The main theme of the 2017 meeting will be «Nautical and Underwater Archaeology for the study of mediterranean societies». The Northern Black sea region, or the Atlantic Fachade of Europe, became ina antiquity, an extension of the mediterranean activities. Is the aim of this congress to consider this areas not as marginal one but nodal points of the mediterranean activities. This conectivity was made mainly by the sea, it means that maritime landscapes, harbours, anchorage, maritime activities or resources or shipwrecks, are an important research subjet to study, from a nautical and maritime perspective, the evolution of the mediterranean maritime boundaries. In addition to traditional issues related to archeological finds in various parts of the Mediterranean, in 2017 the focus will be on new ideas for the conservation and management of sites of historical and cultural heritage. Will be lectures of the leading specialists for students.

Scientific meeting will be held in the form of plenary and poster presentations. On the basis of consideration of received applications, the organizing Committee will select papers and prepare the program. The opening of the Symposium will be published materials of abstracts in English. According to the results of the event will be published scientific papers in English

As it has been in the past, this symposium will continue to provide an important opportunity for scholars and researchers to come together and discuss their works in a friendly and supportive atmosphere.

There will be also a training course between 25 and 28 September 2017 on Geophysical Technologies applied for underwater archaeological research and other fields, will offer to the students the opportunity to get deeper on this problematic and develop specific abilities on its research.

The papers will be grouped into different sessions dedicated to the different and related regions of the Mediterranean. These are as follows:

Also papers regarding the following themes will be accepted:

There are no other limitations regarding the subject and the period, but special consideration will be given to papers adopting an innovative theoretical and methodological approach.

The conference language will be English in order to maintain the usual organization of SOMA conferences. No translation services will be available during the congress.

All speakers are requested to observe a 20 minute limit for presented papers. Presentations will be given as Power Point (.ppt) presentations.

Abstracts must be written in English and should be approximately 250 words max. in length (Title 200 characters).

Submission of abstracts: From 1 May to 4 of September 2017. Send to: arqueologianauticaysubacuatica@uca.es and soma2017cadiz@gmail.com

Registered participants will be notified about their abstract acceptance within 20 days of the submission date. Information on accepted proposals will be sent, via e-mail, by this date. To submit an abstract, please send the Register Form.

The Deadline for Symposium registration is 4 september 2017.

More information about the registration process: